This is a knockoff recipe from The Cheese .Cake Factory Cream Of Chicken Soup. The soup recipe is easy to make and the Bald Chef will show you step by step how to make this soup recipe. The soup includes chicken, half and half cream, portabella mushroom, artichokes, and parmesan cheese . All combined to make one of the best soup recipes you have tasted.

In a large stock pot we’re gonna add in eight cups of water and four chicken quarters and we’re gonna let this come to boil, we saw a bay leaf go in there of course. But once this chicken’s been cooking for about an hour we’re gonna remove it from our stock pot and set it aside and let it cool. Once we have done that but skin off all the excess fat and any of the chicken skin that may be in our stock. We don’t want that in there to make this delicious soup so we want to make sure that all of that is removed thoroughly before we take this to the next step and we’ll just set this stock aside for later. At this point we’re gonna add a little bit of extra virgin olive oil. One white onion chopped coarsely, a head of celery that we’ve chopped up and we’ll put that right into the hot oil along with a red bell pepper and that will be our vegetables that are gonna be used in this soup.

Sweat these off, for a minute, throw it and four cloves of chopped up garlic. Put that in towards the ends, so it doesn’t get bitter and keep working it around. Now, we’re gonna put in a final stir on this and we’re gonna throw in our baby bella mushrooms. You can use white mushrooms if you like, I think the baby bella have a little bit better flavor, we’re using about a pound of those sliced mushrooms today in the soup. Now that we have those in there, let’s continue sweating this off. We’ll set this aside and start to make our sauce. This is gonna be just a simple white sauce put in about quarter cup of oil and three quarters cup of just white general-purpose flour for this purpose. Stir this around to make sure that the flour is thoroughly cooked.

Once we get to that point we’re gonna take two cups of our chicken stock that we’ve left in reserve and pour that into our Sauce. Now this is gonna be pretty stiff as we cook this sauce and chicken stock together, it’s gonna be almost the consistency of pudding, this is gonna be way too thick for soup but you’ll see that we’re gonna add a magic ingredients here which is two cups of fat free half and half. I don’t know how they make this stuff it tastes like the real McCoy and we’ll which this around and start building the sauce that will actually make our soup stock ultimately. Once we’ve gotten to this point, we’re gonna go ahead and return in our sweated vegetables, and we’re gonna stir those around into our stock pot and we’re gonna add our little bit of black pepper.

We’ll doll this up with some  a tease of cayenne pepper, that’s an option but I always like to add a little bit of that. Now that we got those ingredients we’re gonna loosen up this stock with another cup of our chicken broth. That’s the good amount right folks, that’s looking real good in fact. Now we return our deboned chicken, hit it with about, table spoon and a half of salt, give that a stir around and let that cook for about fifteen, twenty minutes. Once that’s all been cooked, we’re gonna add in, approximately a cup of shredded parmesan cheese, stir that in, and we gotta nice creamy sauce, for he final ingredient is a can of artichoke, and I chopped them up a little bit, and that my friends is the recipe. 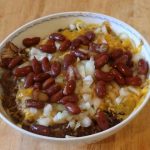