The Bald Chef shows you how to take this Chinese recipe and combine it with a Western-style fried chicken wing recipe that is both sweet, sassy, and spicy. All of the ingredients including the cooking instructions are shown in this video. 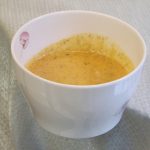