Great Potato Soup Recipe for homemade potato soup tastes great. In this video we will show you step by step how to cook an amazing pot of potato soup using bacon to bring out a unique flavor. Also in this recipe. No fat half-and-half cream is used to induce a creamy taste. You won’t find in most potato soup recipes. The Bald Chef shows you step-by-step instructions on exactly how to make some of the best tasting potato soup you’ve ever had. Give this recipe a try and you will certainly find it to your liking. What I great meal this homemade potato soup would make for your family. Unlike many other potato soup recipes you’ll find this is very easy to make, and makes any canned soup from the grocery store taste absolutely different than his homemade recipe.

If you want to cook up some amazing homemade potato soup these are the ingredients you will need:

The following is the recipe for this homemade potato soup. Start out in a stock pot by frying 6 slices of apple smoked bacon, when the bacon is fully cooked, remove it from the pot. Chop up your peeled carrot, onion, and celery, and set aside. Bring your pot up to medium heat and add 1 tablespoon of butter, then place your vegetables into the pot and cook them until the onion is translucent. At this point add 1/2 cup of flour and slowly stir the mixture to create a Roux. When the Roux is cooked add your 32 ounces of chicken broth and continue stirring the stock until thoroughly mixed. Add all above-mentioned spices and cook with your 4 cut up potatoes for about 12 minutes. At this point add your chopped up bacon, 1/2 cup half-and-half, and you’re 4 tablespoons of chopped parsley. Cook the potato soup until the potatoes are tender. Ladle the soup into a bowl and garnish with your thinly sliced green onion. 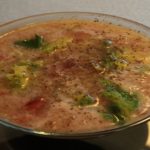