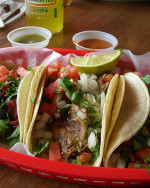 These are some of my featured recipes straight out of Mexico. I love cooking all kinds of different Mexican food primarily because I love to eat and cook it . The cuisine of Mexico too complex to discuss in a short paragraph. I’ve been to Mexico over 40 times and have always loved both the people and the food. This is a very diverse set of recipes that I put together through my travels in Mexico and here in the United States. Some of the recipes are true Mexican recipes and others are more of what I considered Tex-Mex Mexican food. But anyway you cut it is all influence by the great people of Mexico. The Mexican recipes that I love are primarily true classic recipes that come from a long line of food that has been here for centuries. The quintessential food of Mexico must be t the tortilla, the bread of Mexico. But there is so much more than tortillas when it comes to Mexican food. Some of the best seafood I’ve ever tasted came from the waters of Mexico. I hope you enjoy some of the samplings of the various recipes that I have assembled on this list that you can use to create some of the best tasting and authentic Mexican food you can find. This is real Mexican cuisine at its best, and this is the list:

Mexican food is diverse as the people and their culture. The Bald Chef (Glen Izett) has spent many nights eating in some of the great restaurants in Guadalajara, Mexico City, Cancun, Mazatlan, Nuevo Laredo, Heroica , Nogales, Manzanillo , Tijuana, and Puerto Vallarta Mexico. Mexican food is a great love of mine. Mexican food can vary from all regions of Mexico. Most people think of Mexican food such as tacos, enchiladas, fajitas, and quesadillas but there is much more to Mexican food than these dishes. In Mexico I have eaten some of the best fish dishes I have ever had anywhere. And any one that’s been in Mexico knows that the Guacamole and tortilla chips will never stand up to what we have here in the USA. The food from Mexico is top of the line cuisine. The real food from Mexico includes Tacos which include tacos de Asada, Tacos de Pescado (fish tacos), tacos al Pastor, and my favorite tacos carne asada. Also Mexican food includes Camarones Rancheros, chili rellenos, Mexican mole sauce with chicken, and Mexican taquitos.