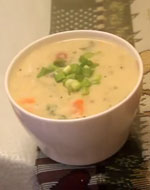 Great Soup And Stew Recipes By The Bald Chef

The Bald Chef Has a fine selection of both soups and stew recipes your family will enjoy. You may ask the question what is the difference between Stew and Soup? Well there is no easy answer, other than Stew is a method of cooking meat called stewing. Stewing is the technique of slow cooking many types of meat to produce a very tender cut of meat. Soup one the other hand is a cooking practice that flavors the broth while cooking the meat or vegetable. Stew recipes tend to be more hearty in natures, and soups tend to be lighter meals. The Bald Chef offers some very unique soup and stew recipes from around the world that you may want to try cooking. One of my best recipes is for homemade Beef Stew.

There are many types of soup recipes that are cooked and served today. The main types of soups are a broth stock, chowders, bisque, chilled soups, and main course soup recipes. My favorite soup recipes include Chowders I have some great recipes for both New England and Manhattan Clam Chowder.Some of the most popular soups in America are Chicken Noodle Soup, Beef Barley Soup, Cajun gumbo,Ham and Leek Soup, Potato Soup, and French onion soup. Other international soup recipes The Bald Chef’s has include recipes from around the world include:

There are two types of stews white stews called blanquettes that are made from veal, lamb, or beef that is only blanched, and then browned, after the stew meat is browned with flour and then stock or wine is added. Some of the most loved stews are Hungarian Goulash, Beef Bourguignon Stew and Ratatouille; a French vegetable stew. One of my best recipes is a Seafood Stew. One stand out stew recipe from Vietnam is Bo Kho and you need to give this recipe a try! Also I like international Stews and American Stew recipes like: