Yellow Mustard,pressed into Cuban Bread. The first thing you need to know about any sandwich is what kind of bread is used. For a true Cubano you need Cuban Bread (Pan Cubano) which is made with Lard. Unless you live near a Cuban Community you will never find this type of bread in your local Safeway. The Bald Chef will show you step by step how to make this great Southbeach sandwich. This is real Cuban Food!

This is The Bald Chef’s recipe for a South Beach Cubano. Take a loaf of French or Italian Bread and cut a 6″ section into half. Prepare the Cuban Roast Pork

Add the sliced Cuban Pork to the sliced bread and top with, Sliced Baked Ham, Claussen Dill Pickles, Yellow Mustard, and crown with Swiss Cheese. Butter the bread and rap the Sandwich Aluminum Foil. Place the Cubano in a George Foreman Panini press or other Panini press and push down on the Cubano. Let the South Beach Cubano grill for about 5 minutes until the bread is crusty, and the cheese is melted. Remove your Cuban Sandwich from the press and slice in half. 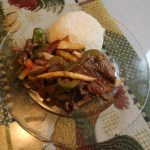 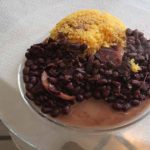