The Bald Chef shows you how to make a Twice Baked Potato.Twice Baked Potato Recipe is a unique way of serving the classic , and simple potato. This recipe goes great as a side dish for steak, beef roasts, or just about any meat you can think of. So if you want to include twice baked potatoes at your next dinner party or just for your family let The Bald Chef help.

Ingredients For A Twice Baked Potato

Wash your potatoes and set aside. Pre heat your oven to 350 deg. Bake as many potatoes as you have guests and bake them for about 55 minutes. Remove your potatoes from the oven and set aside to cool for 10- 15 minutes. With a knife ut a box at the top of the potato just as deep as the potato skin. Remove the cut skin of the potato and set it aside. Remove the potato with a spoon from the skin, and place in a bowl. In the bowl filled with the potato add 1 Tablespoon sour cream, 1 Tablespoon Sea Salt, 4 rounds of cracked black pepper, 1 Tablespoon butter. At this point mash the potato until all ingredients are mixed and you have chunky mashed potatoes. Spoon the potato mixture bake into the potato shin, and top with 3 Tablespoons of grated sharp cheese, and crown with 1 teaspoon chopped chives. Return the twice baked potato to the warm oven to melt the cheese, and serve. 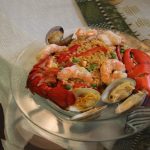 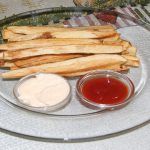