This is the recipe to create amazing Vietnamese Pho soup, to make this soup you need to follow these instructions. In a large stock pot bring 8 cups of water to a hard boil. Add the 1 1/2 pound of beef bones, and the 2 pounds of beef neck bones to the boiling water. Cook the at a rapid boil for about 10 minutes. At this point remove the pot from the stove and drain all of the water out of the stockpot. Add fresh water approximately 8 cups to the bones and put on the stove at high heat. The key to making authentic Vietnamese Pho is to have a very clear broth. On your grill or pride then char the onion, and sliced ginger, add the 1 stick of Siagon Cinnamon, 2 cloves of fresh Garlic, 4 Star Anise and 1 Cardamom Pod. Charring these medicinal spices and vegetables will bring out the true flavor and oils. Once these ingredients are lightly brown but then into the stockpot of boiling beef bones.Take 1 medium white onion and slice thinly, adding about a half a cup of water and a quarter cup of vinegar, to create your sour onions, set aside for later when you put together your Vietnamese Pho. Add a little bit of fish sauce, and 1 tablespoon of brown sugar, and 1 tablespoon of coarse ground black pepper. Boil over medium low heat for about 2 hours to infuse all of the flavors. As the Pho stock cooks carefully skim off any of the scum and fat that is produced in the cooking process. This is key, for you always want your Pho broth to be clear as possible. After the broth is completely cooked and finished, spider out all of the charred vegetables spices, and beef bones. Check the stock for saltiness and if necessary add more fish sauce. The next step is to cook the rice noodles per manufactures recommendations. Place the rice noodles into a large bowl, add approximately a cup of the Pho broth, along with some of the pulled neck bone meat,raw thinly sliced beef, sour onions, Asian basil, lime, green onions, and Vietnamese parsley. Add Siracha sause to taste. Serve immediately.

When cooking Pho you can use many different cuts and types of beef in your recipe. some of these beef cut for Pho include: 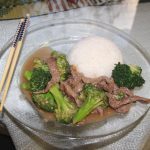 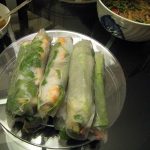