Only the freshest of ingredients are gonna go into this rice recipe. I got three tomatoes and four cups of boiling water. Makes them a lot easier to peel, look at the skins come right. It’s just three minutes in hot water. All right. Now, we’ve got all of our tomatoes chopped up, we’re gonna throw those into a blender. Get these tomatoes liquified don’t put them all at once just get them started getting them pulverized up so you got a nice juice, and then we’re gonna put in a quarter cup of fresh ginger, chop that up, pulverize that up, and we’re gonna throw in two habanero peppers. This is a spicy West African rice dish, this is jollof rice, grind those up. After we have that put in, we’re going five cloves of garlic, never go with too much garlic, grind that up. Get that going real good. We’re gonna throw in a tablespoon of curry. And two tablespoons of tomato paste just to thicken this up a little bit. Once we get that in there. We’ll put the remaining tomatoes in, put the top back on the blender, let that pulverize some more, and we’ll finish up by putting the rest of tomatoes in there and we will have a fantastic stew sauce to cook this lamb up in and really bring this whole rice dish together into something quite special let me tell you that.

So, the next step is we’re gonna prep up our lamb which we’ve got a quarter cup of just plain flour, we’ve got a pound and a half of lamb cut into one-inch cubes and we’re gonna flour this lamb off, make sure that the lamb is fully covered with flour. Now the reason that I do this, is when we get a brown this lamb off, let me tell you, it really seals in the juice of the lamb and lamb is one of my favorite red meats. OK. Put in about a quarter cup of just all-purpose oil, I’m using some canola and olive oil here put my lamb in there and we’re gonna brown this lamb off, until it’s golden brown on the outside and we’ve go to boil it as I said, it’s gonna hold in all the flavors. Well, we’re getting all this in here, have this browned off to a T, we don’t need to show all that. But when it’s done, we’ll just that off, set it aside. Put it into a bowl and have it ready for our next step.

Which is gonna be to chop up one white onion, put that back into the remaining juice, and we’re just gonna cook that onion until it’s completely translucent and tender. Turn the heat down, doll it up a little bit of salt. About a tablespoon and about a tablespoon of black pepper. Once we have that black pepper and salt into our onions, we’ll give it a stir around the block, get everything nicely infused, then we return our brown lamb, give that a stir around the block. Infusing all of the flavors, now comes the big part. We’re gonna take all that gravy that we made, that sauce with the habanero peppers and fresh tomatoes and garlic, ginger and we’re gonna slow and low this for about an hour and a half.

Now, put it into a bigger pot, I’ve added about another cup and half of water, and I’m gonna put two cups of short grain rice right into this. Get this up to a little bit of a boil, then you wanna turn this on low, might check it once or two, to stir it and make sure that it doesn’t stick. Put the pot lid on, and then when it’s done, fluff that rice up, get it all nice and fluffy. 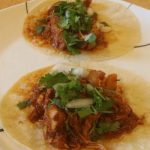