Join the Bald Chef on a gastronomic journey to the beautiful country of France, known for its rich culinary heritage and considered the gastronomic capital of the world. Discover popular dishes like Coq au Vin, Ratatouille, Bouillabaisse and Croissant. Learn about the elegant and delicious French cuisine, and discover the diversity of flavors and styles in this country. Bon Appetit! 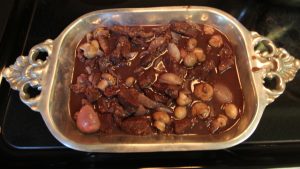 Bonjour, mes amis of the Bald Chef! Today, I want to take you on a gastronomic journey to the beautiful country of France.

France is known for its rich culinary heritage, and it’s often considered the gastronomic capital of the world. From the hearty stews of the northern regions to the fresh seafood of the Mediterranean coast, there’s a wide variety of flavors and styles to discover. In this post, I’ll introduce you to some of the most popular and delicious dishes that you’ll find in France.

First on the list is Coq au Vin, which is a classic French dish made with chicken cooked in red wine, bacon, mushrooms, and onions. This dish is typically served with mashed potatoes or egg noodles, and it’s a perfect comfort food for a cold day.

Another popular dish is Ratatouille, which is a traditional Provençal dish made with a mix of vegetables such as eggplant, bell pepper, zucchini, and tomatoes. It’s a flavorful and healthy dish that’s perfect for vegetarians and vegans.

For seafood lovers, I recommend trying Bouillabaisse, which is a traditional fish stew from the coastal region of Provence. It’s made with a variety of fish and shellfish, such as cod, monkfish, and mussels, and it’s typically served with rouille, a garlicky mayonnaise-like sauce.

No visit to France is complete without trying a Croissant, it’s a flaky and buttery pastry that’s perfect for breakfast or a mid-day snack. It’s a staple of the French patisserie and it’s often filled with chocolate or almond paste.

Another must-try is a traditional French onion soup, it’s made with caramelized onions, beef broth, and topped with a piece of crusty bread and Gruyere cheese. It’s a hearty and comforting dish that’s perfect for a cold day.

French cuisine is not only delicious but also quite elegant, it’s often considered haute cuisine, it’s known for its emphasis on quality ingredients and precise techniques. One of the best things about French food is that it’s often served in small portions, which allows you to try a variety of different dishes and flavors.

So, I hope this post has inspired you to try some new and delicious dishes from France. Whether you’re a foodie or just a lover of good food, French cuisine has something for everyone. Bon appétit!